Welcome to the seventh event of the All Round Series:
We will be racing at Monza on the Formula Target

Here is the schedule:

I will be sad when this one is over

Will we not be doing the race at Autumn Ring that was missed in the middle of the season?

I always thought it was going to be added to the end of the championship?

Not a big deal, but just wondering..
Andrea Lojelo

Sure Matt. Autumn Ring will be on the schedule. We can't miss such a nice race! I'll post some more information soon.
Matt Dawson

Remember to change the forum post so that it doesn't say Monza is the last race. Don't want people getting confused

yes, you can go over that line in the straight line. not a problem.

Please make sure that if you jump a chicane you give back the time gain, and if you are battling with someone, you give position.

And...obviously, take it very easy on the first lap. Easy to throw the race in the bin, and make someone else really angry.
Pobb R Tippet

great advice, Hopefully no one will go steaming down the inside on lap 1 and take anyone out, although in the races I have done this week I havent seen too much of that, Just be mindful of your braking points into turn one on the first lap. I love Monza and hopefully it should be a very close and hard fought race again. looking forward to tonight

Race Report will be up later, Did anyone save the replay?

My race report is up too, Read it here: http://verminracing.weebly.com/news-blog.html

Well i made a small video to sum up my racing experience which was a bit short.

ive not made the video public,cause i dont want to create a negative effect,but instead to try and ''educate'' the offenders.The driving below just isnt acceptable in my gentlemen sim-racing ''book''.


As you can clearly see in race 1 T1 Vanore decided to keep his position no matter what.You can also see that he respectfully acknowledged his mistake and allowed me to pass him -its common that if a guy hits a competitor,he waits even if he has to lose several positions and allows the hit car to get the position back.At least thats a ''rule'' that gvrteam.gr taught me (maybe i need to be educated some more)-

I wasnt anywhere near his lap times and he could have easilly passed me maybe a lap or two later,but he found it better to win the 12 lap race in T1.Also i didnt get a simple sorry,which would allow me to understand that he made a honest mistake.Its the second time Vanore treats me that way (he hit me again in Blackwood with the F1800).Of course then i didnt say a thing but todays incident was a bit too much.Im not writing all this to ask for a punishment.I just want Vanore to see his mistake and try to learn dealing with other cars when close to him.Yes mistakes can happen but its better to lose a position and get it back later,than to ruin an other mans race.(of course if your ego cant be controlled and no action punishment is involded this behaviour will continue,untill only a handfull of ppl come to a race)

The second incident shows the ''i want my position back at all costs'' mentallity of some racers here.He knew he wasnt able to pass from there cause the white line clearly dictates the track borders.I kept my defending line and never tried to touch him but la raspa thought im just another obstacle of the track.

Instead of applying the brakes,he expected me to give him room,when i clearly have the right to keep my position.He was off track and decided to pass from an impossible place.He didnt choose to turn to the left cause he knew hed lose his place -i d in the inside at T1-.I was clearly faster than him but he clearly cant understand when its time to yield and simply let the faster car pass.

Ive never posted nor complained about a race incident and i try to justify any mistakes if/when are done in the heat of the race.But this is getting out of hand.

I know its a simple come run and race championship but some respect even from a few ''bad apples'' much be present.

I decided to race only a few hours prior to the event and i tried to practise with my team mates in order to be safe and never ruin anyone elses race.Instead of having a good time,i lost my practising hours and the time i tried to race only because some ppls egos cant be restrained.

If you want netKar to get better and the servers to be filled with racers,i can assure you that this mentallity and way of on track behaviour scares and drives ppl away.

calm down (at least a bit)

In a previous posting Andrea said, it is allowed to go over the white line on he straight (don't know why, but ok, doesn't matter much regarding speed improvement),
maybe that's why franky thought to take this way, although there is plenty room on this straight anyway

, so taking the right side would not be necessary for him.

regarding my two races, they were more fair:
-race1: Great, spooky close battles with 3-4 cars at once mostly all over the race, but all stayed clean. Just one driver blocked me while I was left aside of him for an overtake, that was a
hard move from that driver but still no kamikaze move of him.
Unfortunately I ran out of fuel

in the last turn of the last lap at pos.7. resaon: I did burn too much fuel in the starting-phase on the grid, high revs for 10+ sec. before the lights turned green (costs much fuel),
otherwise my 36l fuel would have been enough to finish the 12 laps.
I still had some bad FPS issues at the usual place in chacane 2 (game was freezing for some short moments there), so I had to drive carefully there, which explains my 'bad' fast laptimes in that race.
For the second race I turned off the v-mirror, which sloved the very low FPS issue at this place on the track.

-race2: not much cars around this time. Just the previous mentioned driver was a bit agressive to me again, since he hit me several times from behind in the first chicane after I overtook him on the straight.
So I had a damaged car in the first part of the race until I did the planned pit stop at the middle of the race, but I got adopted to control it (the damage), just the wheel was turned 45° to the right.
I think he had somehow too much adrenaline at this point and this is not his normal behaviour.
As I pitted I crashed my car at the entrance on the left wall (also caused because of that little car-damage) and I was standing in the pit-entry, Gek came in in the same lap -2-3 sec. later- with high speed
-> crash, but didn't matter much, we still both could get running our cars again to drive to the aimed pit-box and drive on.
The rest of the race went out ok, no traffic.., so I was just driving 'against myself' / trying to hotlap until the end of the race.

yeah i had a bit of slow down in Variante Della Roggia on the first lap of the first race and also same lap second race, seemed more like a little bit of lag than performance issues, I think most people had the same thing, so I was careful in the chichane as well for the first couple of laps

I agree I think calming down is the best thing to do right now, sometimes drivers just become "over focused" on a position and thats usually when an accident that shouldn't happen...happens. I am sure it was just one of those moments with Franky as he is usually an extremely fair and competitive driver.

yep, mainly a totally filled grid of around 12-15 cars + maybe in case of some bad connection / Net-quality causes such issues, but it's definately a combination of both things (track + grid, net),
since this section of the track is naturally a sensible one, because with an average PC setting you get lower FPS at this track-part even in practice, when your're completely alone on the track.
At the new Imola track I have this issues all over with full grid

(much more demanding than Monza), but now with my GTX 560ti + overclocking my CPU properly I get my PC into
a condition to handle this.
Vincenzo Vanore 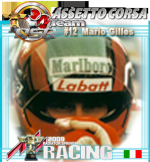 I just believe that Charalampou, being the first times that competes with us, has not had time to meet you. Errors do it all, and the most important thing is to recognize. , You never refrained from doing so. From what I know , you are not winning races because one throws out the other, but simply because Vai damn strong .... Even Nasos is really fast, and this kind of duality will lead to other errors on both sides ... I know I am something. Congratulations on the victory of the season, and congratulations to Nasos for a fast rider added to our championships.
Sponsored content