You are not connected. Please login or register
How to register to our leagues
Current League: Open Wheel Series
+2
Riccardo De Rosa
Mark Schilling
6 posters
Go to page : 1, 2

This is a link to a clip of the beginnings of my first track. Just started it so it's rough but hopefully I can turn out something acceptable eventually.
It is a track I devised myself based on real roads around a town near where I live. I mapped out the course on google earth and corrected most of the height data. At the moment I am concerned with getting a good shape and a nice feel to drive. Eventually there will be houses and shops lining most of the streets but at the moment I just have a grass border.
Making it in Bobs Track Builder and converting to rFactor because that and richard burns rally are the 2 formats it outputs in. Then will hopefully be able to convert it to netKar once the tools are made available.

Any feedback would be appreciated

Here's another video of a few changes and a bit of progress. Still haven't really got any terrain mesh done but next video will have that.
Trying to get a nice flow to the track first. Pit lane position has changed since last video but still isn't quite right.

p.s. - Excuse the driving as I still haven't got my wheel back so am using a joypad

good work! But for the race i see it hard. The curves are too sharp.
To convert fo NK is simple. You must import it in 3D Studio and after export in NK with NK's track editor.

sorry for my english. You can use isi tool for import in 3D studio or you can convert your track with 3DSimed in 3ds format.

Is a long work

Thanks for the reply Riccardo

When you say the corners are too sharp, do you mean too tight or not smooth enough(as in too jerky and need to be smoothed)?
It's supposed to be a street circuit so if you mean too tight then it's not really any tighter than monaco in bits

As for converting to netKar, I tried to get my head around the editor but couldn't. I am waiting for a tutorial. If 3dsim ed had an Export to netKar button it would make life a lot easier.
Maybe they will add this in a future release as the editor is available now??

no. there is no software that does everything automatically. At least for now. You always have a double pass. BTB (rfactor format) to 3D Studio to NK track editor.
When you're ready and you will have problems. we will help you to solve them.

Thanks very much Riccardo

The new video I posted earlier I swapped for a higher quality one.

Regarding the sharp corners you mentioned. Do you mean to apply smothing to the track to take away any jagged edges or just that the corners are too tight? I tried applying some smoothing just now and it works on some parts but other parts I feel that the track looses it's feeling.

Here's a pic of the location with my track placed on top. 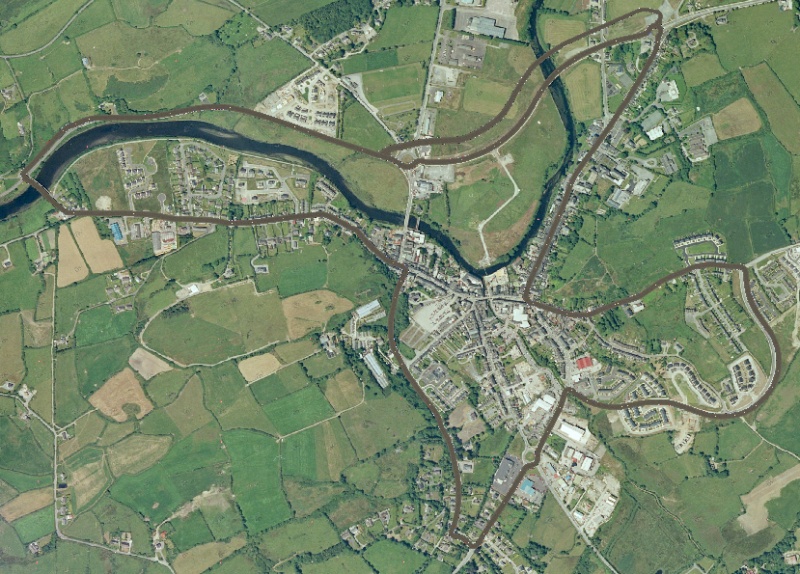 ps: the fastline you need to fix
Stuart Whitehead

Nice to see a long track, with a good mix of fast sweeping sections and some slow tight stuff. Just my kind of track

Don't smooth out the track surface to much please

Yea Riccardo it's 7.033KM and the width is pretty much correct for most of it.
Where it turns up some of the side streets it will narrow a bit

I just exported it quickly to test, so the fastline is not configured properly.
Will only take a few mins to put it in though.

Yea I think it will be fun to drive when it's complete, and yes I will try to retain most of the road character while at the same time slightly tailoring it for racing.
It's an irish road so potholes galore

I will add all the side roads in the town eventually and remove alot of the tyre barriers and just put some small railings up so you can see you are flying through narrow town streets. Will give much better sense of speed. The next step is to drive the road and record on a video camera and take still shots to more correctly finetune certain areas.
I will also photograph shops and houses and the like for textures. When I get some shots I'll upload here so you guys can see.

For anyone not familiar with the TT circuit check out these 3 clips.
Onboard with Joey Dunlop (King of the Mountain) R.I.P.... around the Isle of man TT circuit.

Video for lap is in 3 parts as it's so long. Enjoy

This year in may, it will be 103 year aniversary of the Isle of man TT!!

Most exciting, and dangerous race on the planet

Here's a clip of the modern bikes running around.
These days the big bikes are hitting 200+ MPH

My track or the TT?

)
,or if anyone can do a quick convert of just the track surface to netKar format so as we can test to see how it feels in netKar, just PM me and I'll send you the file.

Anyone know what the story is with that? Is it in development?

If it is a group of us should totally start building The Isle of Man TT circuit for it. That would be awesome.
Just hope it has road bikes like the GSX-R 1000 and Yamaha R1 and not just moto GP bikes.
A moto GP bike would fall apart half way around the first lap of the mountain circuit

If the physics are anything like netKar then WOW

Mark, very well done! it's nice to see your progresses on your track. I hope you will soon figure out how to import it in nk!
By the way I'm impressed about your driving skills with a joypad! I wouldn't be able to do few hundred meters without crashing!

I was shocked about the video you posted about the Isle of Man TT. You should be completely insane to drive a motorbike like that!

nobody heard anything anymore from nKBike. It was a nice project though! The real problems with motorbike games is that there are non controllers available.
Playing with a steering wheel is just ridiculous, with joystick or with the keyboard... I don't know!
_________________

Regarding netBike.. That's a shame. Alot of potential by the look of it.

If anyone here is into biking, and hasn't heard of TT superbikes-real road racing championship for PS2,
you should check it out. Best bike physics so far and the only game that has the full Isle of Man circuit in it.
Also has the Northwest 200 in northern Ireland which is also a fantastic track.
Shame that it's on the PS2 as the graphics let it down, but for the feel of the bikes and just to drive the mountain circuit, it's worth it.

There are roumers that they are working on possibly either a PC or PS3 release and if so that would be a must buy.
Anyone interested, go check it out. Can buy from the developers I think. Company caled JESTER INTERACTIVE.

But back to netKar......So Andrea, when can we expect the track editor tutorials then?

There is a full IOM for Grand Prix Legend IIRC, then you must love Dundrod too? Really lovely road track

The Isle of Man version I think you're referring to for GPL, is an Abridged version.
Sort of like a tribute to the isle of man.
Was done by a guy named Jim Pearson, who also did Dundrod(2 versions) and Adelaide(2 versions).
While it's a fun track to drive, it's not by any means accurate.
It is only 15 miles long, where the real one is 37.7miles

He was working on a full verion, but not long ago his website showed a message saying "Gone Fishing"

,
and that he had halted work indefinately.
Since then though the message has been taken down but there is
no word on any further progress. Pity really because he could have done a good job!

"The Targa Florio was an open road endurance automobile race held in the mountains of Sicily near Palermo.
Founded in 1906, it used to be the oldest sports car racing event, part of the World Championship until 1973.
While also a whole tour (giro) of the island was used at times, the track length of the last decades was limited to the 72 kilometres (45 mi) of the Circuito Piccolo delle Madonie which was lapped 11 times.
After 1973, it was a national sports car event until it was discontinued in 1977 due to safety concerns.
It is since run as a rallying event, and is part of the Campionato Italiano Rally, the Italian national rally championship."

Here's a lap in GPL divided into 4 clips


(I replaced the 5 clips I had here with these 4 I just stumbled across.)

Wow! Fantastic drive by this guy.
Putting an old F1 car through it's paces, RALLY STYLE

ok! I'm working for this.

you must take this software:

I have all of the above!!

Ok thanks!
what do you think?
I start from a circuit ready for rfactor or I start from 0 and design a mini-track with bobs and after i export this in rfactor format and ecc ecc?