Here is the schedule:
21:00 (GTM+1) Briefing in our Chat
Qualification: 20 minutes. No restriction on the amount of laps
Warmup: 5 min (waiting time before the race session)
Race 1: 46 laps

To avoid some more problem we will not use Full Mode for this race.
You will be allowed to do whatever you want. In case of damage on your car you can press ESC, fix it and continue, even during the race.

We expect anyone to drive carefully anyway, avoiding problems.

Real weather will be used:

A couple of enjoyable practice races from yesterday:

fast guys are driving laptimes like in the F1 at quali (with Kers and DRS !), 1:20.0... incredible !
But anyway I think I'll be a bit better (again) here, -for the last race at Nürburgring I tested only 1 hour directly just before the event and
therefore the setup was not very fast, with more wing and stiffer spring settings I get more than a second faster than I was able with the setup I used at the event, also
I did not know that it was allowed to use this whole curb-extension of the Nurburgring chicane -until I saw guys doing this in the race-.

good, interesting and fun track the Hungaroring is, I rather like those 'old-style' circuits, bomb all those new computer generated and boring tracks like Abu-dhabi and so on

such tracks have no soul and character.
Fabio Grippa

can you please explain us which is the curb extension we can use?

Looking at the regulation we need to have at least two wheel over the proper asphlat track....in this track there are some turns in which we can go a lot outside the track taking a huge improvment over the lap time (T1, the exit of fast left turn, then the fast right in the last part of the track, the slow right turn and finally the fast right turn going into the main straight....everyone know what I am speaking about...). Just to have clear idea before the official race of what is allowed and what is not allowed...

Thanks a lot for your help as always
M Waechter

Yeah, what Fabio says needs to be clarified a bit for this track, cause almost every corner here has huge cerb extensions (which regarding our rules should not be allowed to use !)..
Regarding our rules the use of the cerb extension of the last chicane of the Nurburgring was wrong too (so I don't know why it was allowed), because left tires tires are far away from the cerb
when you drive fully over it.
Andrea Lojelo

I think our rules are pretty clear on that:
valid 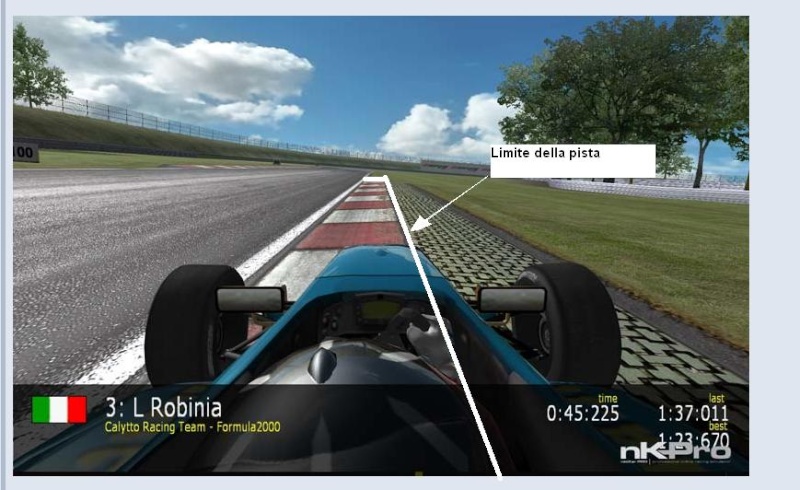 In case of Nurburgring, just like at Crema, on a chicane with tyre walls quite close, we allow to go over the extension at your own risk.
It isn't easy to enforce an anticut rule on such a tight esses, and the wall is usually a good way to prevent excessive cuts without taking risks (although in Nurburgring isn't as close as at Crema).

So to go back on Fabio's question, it's fine to go over the green curb extension, but keeping at least 2 wheels on the curb.

Regarding the pictures in the rules it's easy to understand.

Long ago in the past I had some misunderstandings (confusion) with the text element in the rules -but it's clear now (only when an extension is there the curb is regarded as the track):
"..but the kerbs are not and. Where a kerb extension is present, the kerb i is considered part of the track.."

check the syntax of the sentence and correct it, some little errors there in it 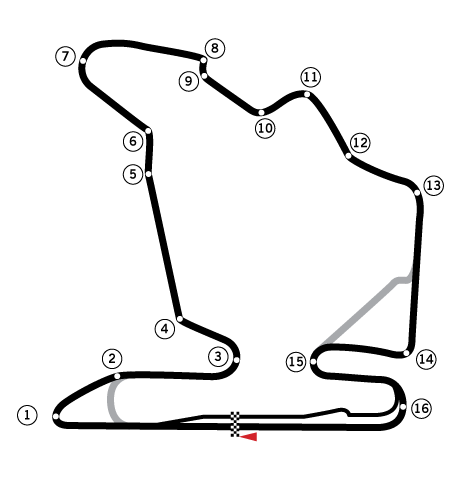 so basically two wheels have to be within the white line at t1, t6, t13 and t14 (unless taking avoiding action)?
davide zardin

I wanna ask for help on your chat... I don´t think it is working here. I can hear the messages notifications, but I can´t see any, and also am not sure if ppl can read what I am writing there. Anyone have a clue on what I can be missing? I´d like to not miss the briefing, and do everything required to join the race with you guys.

Many thanks in advance,

so long as you have read the rules and understand whats going on, have allocated and know the server password, it shouldnt be too much of a problem. all the briefing is for is questions. i guess you can ask them here and now.

the servers go live at 21:30cet so just keep an eye out for whichever group you are in
Vyacheslav Potapenko

Silvio,
I don’t see you in entry list for today race. You need to confirm participation from Control Panel. To check that your confirmed you can see entry list:
http://www.radiators-champ.com/index.php?option=com_wrapper&view=wrapper&Itemid=58

for the chat – I just opened it and I see your messages. I think you should be fine there, maybe nobody was logged
Silvio Tavares

like I told you in chat window, you just saved my life.. lol... Wanna be sure I share my "thankfullness" to everybody..

see u on track!

Cheers to all
davide zardin

Netkar still playing tricks to me.. I tryed to make everything right... but, after a good qualy on server B, on p3, I guess I left the car with system on, but engine off... I assume it drained my battery, then with 10 sec to go, surprise... engine doesn´t launch..

Had enough time to quit the grid to not spoil anyone´s race at the start, say some dirty words to myself and my car, and wish all a good race...

Next time I get it right...

Thanks everybody, hope you have a great one, and see you next and last round... witch will happen to be my very first with you.. have to get this one right!!!

Cheers mates, have a good one!
Ferran_sanson

I found very much improvement this event to do a better setup, thanks to an alien for useful tipps regarding the driving style with a different kind of setup than the kind I used all the time before every event

.
In the past I was adopted to my own kind of setup all the time, which was fine to drive but not the fastest way to go around a track.
Know I know some certian settings in the car-setup to do better or even the opposite* than I did before (*revert spring stiffness of front/rear, lower differencial, better gear gaps: high gap between lower gears
and lowering the gap each gear, more real camber-settings especially regarding the rear, cause there I was too extreme with my old setup), so I got a better pace this time at Hungaroring. I made two big
mistakes at the 3rd gear corners in the first half of the first stint (lost 20 sec.), because I still had to learn how to adopt to the new driving-style with this different kind of setup.
-Talking about the start / lap1, there were some accidents directly after t1, but I gladly got through all this standing cars there.

Finally an important thing to mention: After the race we found out / recognized that the track has a problem, because there seems to be no finish-line in the pits...!, so when you stop, you are one lap behind !
Most did one pit stop, but Gek and Mika did two pit stops and found themselfs -1 lap / one lap of time more behind than all of the other guys, so both lost their lead by pitting twice beause of that track-issue.

I dunno what happened mates, or if I pressed those keys by accdent.. cant tell really.. but the car just didnt launch., like if the battery had drained... i simply couldnt start the engine on the grid.. so I just quit, after wishing a good race to all.. I hope it doesnt happen again..

Hmm, if you have auto-clutch off, & put the car into first it'll stall then try to restart itself (assuming you have auto-systems on) which will drain the battery but I think you can just box & that'll fix it. If you pressed either K or P you just need to cycle through until they're off (a pain I know). G is the other annoying one (but you normally only discover that's on when you try to shift gear)

It's the pitlane naming, like with Istanbul & another of Gary's tracks (can't remember which).
M Waechter

Maybe not really the right result for everyone

, cause I was definately at 8 position in the end, franky or fabio crashed in the last laps and had to press ESC, so I gained his position and I was at pos.9 + even an another position (maybe it was the one of PC Structures) too, which resulted being at the 8th position finally. I have to look the replay again, to see who was the second driver who got behind me in the final laps.
+ Paul overtook Clive in the last lap, Gek had already done his second stop at this time, he was a bit better than 7th pos. before doing his second stop, he was 4th or 5th or even better.

But, I know you were just explaining the matter of the right result regadring Mika in the standing in that marked the red border, right ? (At first I thought you meant it to be the final result, that's why I wrote this above.)
Sponsored content